So you’ve heard that farming a few profitable crops is now a viable source of income for many individuals. And you want to join the tribe too, but the lack of a sustainable farming space is restraining you from doing so. What are you supposed to do now?

Nothing to fear! You might not know it, but growing the most profitable crops doesn’t require big-fat farmland or even a to have on your list of profitable small farm ideas.

You can simply start it in your backyard. And trust me, it will only need you to choose the most profitable crops to grow to go beyond your expected profit margin.

Therefore, this article discusses some of the most profitable crops (highest yield per acre crop) to grow for a small farm that will help you give an overall idea about which crops make the best fruitful harvests.

Ever Heard About Cash Crops?

Have you ever heard of cash crops? Cash crops can be an essential part of a country’s economy.

The best cash crops are planted mainly for the purpose of sales rather than personal usage. They are also known as profit crops. The most common profitable cash crops include corn, wheat, cotton, and soybeans.

These crops are typically grown in large quantities and often require special equipment or chemicals to maximize yield. The best aspect is that these profitable crops may be produced by anyone, even in a very little space.

What Makes a Crop Profitable?

Aside from that, you can’t make a profit if your investment costs are too high. For example, you cannot use a fertilizer that costs way much than the one that the crop can easily adjust itself to. So, it’s essential to track all of your farming costs carefully.

Weather conditions can also affect crop profitability. For example, if there is drought during the growing season, farmers may not be able to produce many crops. It could lead to lower prices and lower profits.

Optimizing Your Garden and Seeds for Different Seasons

The Best Trees to Grow for Firewood

The Most Profitable Crops For Small Farms and Home Growers

Want to make some extra money from your small farms or home garden? We’ll list the most profitable crops you can grow to add to your list of profitable hobby farm ideas. Let us know if there’s a crap you feel is missing on our list!

The world of herbs and spices is fascinating, with each one having its own unique flavor and benefits. But did you know that these crops are more profitable than others? Here are some of the most profitable ones to think about.

Lavender is considered the most popular and extremely versatile crop for profitability. You can use this crop for anything from medicines and food flavoring to fragrances. Its essential oil promotes vital health benefits, making it the most demanding herb.

Lavender takes about 90 to 200 days to mature. However, these crops are slow growers. So to get fully developed, they may take up to 2 to 3 years at most.

Small-scale farmers can expect major profits from these lucrative crops. One acre of lavender can produce $10,000 – $30,000 worth of lavender (on average) per year.

Saffron is considered the most expensive culinary herb among other profitable crops. It isn’t easy to grow, and only a tiny amount of the spice can be extracted from each flower. The stigmas of saffron are dried and used to flavor food or make tea.

Saffron takes about six to ten weeks to grow appropriately. However, once it is fully developed, it can last up to six months.

Saffron makes one of the world’s most expensive spices, with a price tag exceeding $29,000.

You may get $29,000 worth of saffron production per kilogram

Gourmet garlic is not the same as regular garlic. They’re relatively uncommon, yet they’re one of the most profitable crops for small farms. Investing in these crops is a viable choice for small-scale farmers. Many of them have claimed to obtain a high return on investment.

Gourmet garlic takes longer to grow than regular garlic. It may take up to nine months to mature.

You can earn about $160,000 – $192,000 per year from selling gourmet garlic. Of course, this value will fluctuate based on the price of garlic on the market and your manufacturing costs.

Here are some of the most profitable fruit and vegetables crops to grow for small farms. Related read: Why You Should Grow Your Own Vegetables by Zoe.

Goji berries are a superfood packed with antioxidants and vitamins. They can be juiced or made into a fruit bowl or dried and used in trail mixes. And so, these are pretty demanding fruits for the health-conscious crowd.

Planting goji shrubs take a long time to mature. These crops take about 2 to 3 years to grow into fruit. However, it might take 3 to 5 years to reach full maturity.

It takes about 2 to 3 years to produce fruit

Cherry tomato is a high-value crop that can be harvested in any place and time of the year. You can even grow cherry tomatoes in pots at home! These bite-sized tomatoes are perfect for snacking or adding to salads. Thus, people have a demandable need for this vegetable from the local growers.

It just takes a few days to harvest cherry tomatoes fully. In less than eight weeks after sowing, you can pluck out ripe cherries right from your own backyard.

You may expect to get around $1400 of value from an acre of cherry tomatoes. The pricing, however, may differ based on the farmer’s markets.

Per acre of cherry tomatoes have a $1400 estimated value

Arugula is also one of the most profitable crops to grow. It is loaded with nutrients, has a potent flavor, and is extremely low in calories. Plus, it will grow just about anywhere. So, it is a good choice for a small-scale farmer who doesn’t have a lot of space.

Arugula should be planted in the early fall or early spring, as this is the optimal season for harvesting arugula. Within six or eight weeks, you should see its budding leaves blossom.

According to global market rates, arugula’s price is about $6 per pound. This crop yields roughly 9,000 pounds per acre, estimated to be worth around $54,000.

Edible fungi are often overlooked as a crop to grow for small farms, but they can be pretty profitable. Precisely, the Gourmet mushrooms make the best profitable edible fungi to harvest. Here’s an overview of these mushrooms, their estimated revenue, and harvest time.

Gourmet mushrooms are often found at specialty food stores and are popular for gifts and cooking. These specialty crops need special growing conditions, including the right temperature, humidity, nutrients, and light. But don’t worry, the cultivation of gourmet mushrooms is similar to gardening. So, you can harvest them in any small-spaced garden.

It takes about seven to eight weeks to grow gourmet mushrooms. After casing the mushroom seeds, the harvest should commence between 15 to 21 days.

Other Crops for Small Farms

Other than the crop mentioned above, various crop choices can be profitable for small-scale or modern farmers. Below are some other crops to grow on small farms:

A Christmas tree is a great way to profit on a small farm. Every year there’s a demand for these trees during the Christmas season. So, it’s better to harvest them anytime around late spring.

Sugar cane, sugar beet, soybean, etc., are also considered the best cash crop for farming. These crops have a highly profitable margin that you should count on if you are thinking of starting a small farming business.

Farming doesn’t need a proper, large-scale, professional farmland; instead, it requires the most profitable crops to grow.

Whether you are a modern farmer or a seasoned pro with years of experience, following this basic rule of thumb is the key to obtaining the finest harvests and a sustainable profit.

The crops listed above are believed to be the best for small acreage cultivation (even if it’s just a quarter acre field).

If you aren’t sure which crops are the most profitable, choose a few of these crops and experiment to see what works best. 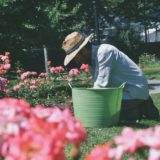 I'm Noah. I'm a late bloomer when it comes to farming. I really enjoy working our land, especially when I get to fight weeds! I also really like my big truck.

I'm so happy I can share my love for farming and our farm animals with Zoe. It's great that we can wake up to fresh eggs and the sound of bees making honey every day!

[…] this article discusses how to grow plants from cuttings and all about their types. So, you can grow a new plant in your garden more quickly and efficiently within […]

[…] you are a farmer, you know that there are countless details to take care of. Your animals, your crops, the weather – it can be a lot to keep up […]

[…] The Most Profitable Crops to Grow for Small Farm […]

[…] agriculture, the land is managed primarily to produce crops, to maximize yield. This often involves monocropping, heavy machinery, and chemical inputs.Permaculture is a more […]

We’re the Urban Farm Store. Our goal is to provide you with the best urban farming experience possible. We carry a wide variety of products, guides and articles within the home farming space. With our help, you can grow your own food right in your backyard! Read more about us.

Feel free to reach out to our Editor if you have ideas or would like to contribute to the website. You can find our contact details over at our about us page. We hope to hear from you!